Alan McConnochie Distillery Manager Inducted as Keeper Of The Quaich 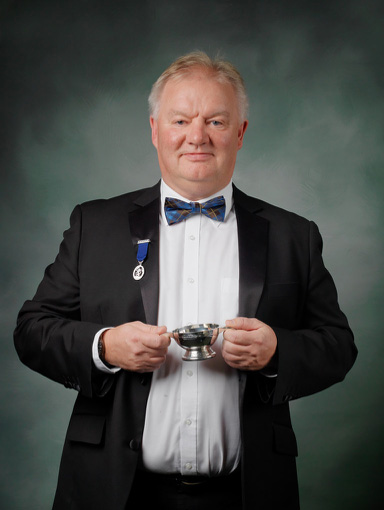 Born in the shadow of White Horse Distillers in Glasgow, Alan McConnochie was always destined for a future in the whisky business. Starting his first job in 1973 in the bottling hall of White Horse Distillers, Mr. McConnochie never dreamed for one moment that he would reach the pinnacle of the whisky industry. Now as Distillery Manager for The GlenDronach, BenRiach and Glenglassaugh, he has been honoured for his services contributing to the global success of Scotch Whisky, being inducted into the Keepers of the Quaich (Monday 8th October 2018).

Before joining BenRiach in 2004 Alan progressed his career through distilleries including Laphroaig, Bunnahabhain and Tobermory. A global drinks company renowned for its American Whiskey and now Scotch Whisky brands, Brown-Forman purchased The GlenDronach, BenRiach and Glenglassaugh in 2016 and Alan plays a pivotal role in carrying forth their time honoured whisky making traditions.

The international society held a private ceremony at Blair Castle in Blair Atholl and guests at the prestigious event were addressed by the international rugby star Sean Fitzpatrick, former All Blacks captain and the world’s most capped hooker.

Welcoming his induction into the international society Distillery Manager Alan McConnochie said:
“I don’t really like to be the centre of attention and I am far happier making whisky, but I have to admit it is a privilege to be recognised by the industry. Being inducted into the Keepers of the Quaich was a really special moment I will treasure. It is an impressive organisation which celebrates an important part of Scottish culture and all that people love around the world about Scotch Whisky.”

Peter Prentice, Chairman of the Society said:
“Scotch Whisky was, and remains, the first global spirit and Keepers of the Quaich exists to recognise and celebrate the exceptional contribution of people working in all aspects of the industry, all over the world. At the ceremony we inducted new Keepers from no less than 20 different countries which demonstrates the continued popularity of Scotch Whisky.”

We’re delighted to announce that The BenRiach Distillery Company has won 16 medals, including 3

BenRiach is a registered trademark. ©2020 BenRiach. All rights reserved.

To find out more about responsible consumption, visit Responsibility.org and OurThinkingAboutDrinking.com

All other trademarks and trade names are properties of their respective owners.